Client testimonials are some of the first pieces of content that business leaders consider when updating their websites.

Testimonials establish rapport and buyer trust, and back-up the value of your business's products or services... they're the perfect form of social proof. You know the true value of your service offerings; client testimonials, and particularly video testimonials, are a surefire means of conveying that value and backing it up with evidence.

Producing video testimonials with clients isn't a significant challenge in of itself. Any marketer with a smartphone can shoot a decent testimonial video. The biggest testimonial challenges revolve around capturing honest, almost conversational speech, and compiling footage in a way that amplifies value and convinces viewers to act.

Like many other forms of content, written testimonials can be greatly supported with video—in this case, video adds to the authenticity of a client's written claims, and benefits can be portrayed as more of a success story than a statistical case study. In this blog, we outline 3 easy ways you can create honest and awesome video testimonials for your business.

1.) Have a Conversation Instead of a Scripted Run-Down

Let's deal with the most important item on this list first, as all other items stem from this one onward. Testimonials are supposed to be honest. You shouldn't use testimonial space as a promotion for your business, but rather as a means of showing prospects your solutions work in a variety of use cases, and supporting that claim with real-world evidence and, most importantly, real-world people.

"When it comes to establishing trust, it doesn’t matter how compelling your calls-to-action are, how engaging your content is, or how quickly your pages load on mobile screens. If visitors to your site have any doubts about how trustworthy you are, they’ll bounce right out and never come back."

The people you feature in your video testimonial should be honest in what they're saying about your company, not reading off a prepared script. The easiest way to do this is by creating a comfortable setting and merely conversating with your client. Ask them questions about their experience, what they were trying to achieve and the results they've had by working with your company.

For testimonials, we'd even drop using pointer notes or outlines as we recommend for other types of video. Your testimonial videos should be the most honest and believable videos your company produces. At most, provide your client with a short list of sample questions prior to recording, then expand on these questions as the flow permits. In doing so, you could capture absolute gems you hadn't considered earlier.

Your testimonial doesn't have to be perfect, either. You want to show that your clients are real people—real people that once had problems your company has since resolved.

As a final note on this point, the testimonial is your client's story, not yours. Let them tell it in a way that naturally flows from thought to thought. There's a big difference between directing the conversation in a positive way and forcing desired responses.

Today, video is probably the most engaging form of visual content a business can use to attract and convert new audiences. Recorded webinars, explainer videos and video testimonials offer great value, but each type of video comes with a unique limitaion: time. Certain videos, like webinars, perform well as long-form, gated content. As for testimonials, it's best to keep messaging concise and pack a big punch in a quick, digestible package.

For the best results, keep client testimonial videos between 1-2 minutes, with 3 minutes being the absolute max.

Video is very effective at grabbing a website visitor's attention, but that attention doesn't last forever. This, of course, means you will have to format your video testimonials and storytelling elements to fit a tight timeframe.

However, don't rush production to keep all testimonial footage under 3 minutes; instead, have a natural conversation with your client that discusses the problems (pain points) they were dealing with, how they came to your business and how your products/services benefitted them. Then, mine through the conversation and compile key phrases and responses that tell the story you're tring to convey.

Here are a few key pointers to keep your video messaging and language clear, and avoid viewer drop-off due to video length:

You've abandoned scripting and have set a goal to keep your testimonial video below 3 minutes... now what? What other steps can you take to get the most out of your timecode? Here's one we see many businesses overlook: they feature a "talking head" throughout their entire video testimonial.

talk·ing head (tôkiNG ˈhed), n.,
1. A commentator or reporter on television who addresses the camera and is viewed in close-up.
2. Television Slang. a closeup picture of a person who is talking, especially as a participant in a talk show.

It doesn't take much time for audiences to lose interest in a still shot of a client going through the testimonial motions, even if the testimonial itself is unscripted and to-the-point. In addition to having multiple cameras rolling during your testimonial shoot, we highly suggest including b-roll, product videos or even screen captures in testimonial videos.

Shooting an engaging, believable and actionable testimonial video isn't as simple as pointing a camera at a client and asking them "Why is our product/service good?" Telling stories and injecting emotion into your marketing process are some of the greatest strengths of video, and this certainly applies to video testimonials. 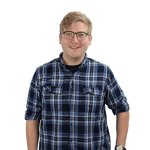 Alex is a University of South Florida mass communications graduate and Video/Media Specialist at Bluleadz. He is a big movie nerd, loves (possibly dangerous) concerts and enjoys taunting co-workers with a camera. He's probably seen The Royal Tenenbaums 14 times by now.

Inbound Marketing 101: How to Attract and Close Your Ideal Buyers
How to Create a MarTech Stack That Supports Your Growth Goals (+ Best Tools)
How To Develop a Content Strategy to Drive Revenue (+ Examples)