We’ve all seen it: an archetypal website page where the search rank and layout are all pristine, and yet… riddled with typos and poor grammar choices.

I can’t even begin to expand upon the amount of ubiquitous spelling and grammar mistakes I find while surfing the internet – regardless if I’m looking for them or not. And lately, grammar nazis have developed the urge to point out every little mistake they find.

Whether your tone is taut and professional or compelling and colloquial, the established rules of English are there for a reason; to break them, of course, and to avoid these common grammar mistakes littered on the internet like plastic waiting to choke an innocent animal (spoiler alert: your readers are the animals).

Now don’t get me wrong – I’m no grammar guru myself – and I’m not claiming hellfire on the mouth of a volcano for an occasionally misspelled word or two. Typos happen, but that’s not what I’m talking about here.

The rudimentary lessons we were taught in grade school, now that’s what I mean. Take a look at these 10 common grammar mistakes; next time you are generating website content or copy, exercise caution and bear remembrance of the following:

Honestly, though, I would be a millionaire if I got a dollar for every time I’ve seen this misused. This is one of the most common grammar mistakes, and you might just get called out on it if you mix the two up.

As a guideline, “your” is possessive pronoun, while “you’re” is a contraction describing “you are.”

Ah, another common mistake that rattles my bones every time I see it.

This follows the same protocol as the previous “your” and “you’re” in the sense that “its” is a possessive pronoun, while “it’s” is a contraction for “it is.” Arguably, I’ve seen this littered and hidden in more things than the “your/you’re” discrepancy.

Pro tip: If you are confused between which to use, read the sentence out loud and where you would put “its/it’s,” say “it is.” If it doesn’t make sense, it most likely doesn’t belong there!

These two are like a snake in the bushes, where it’s just barely noticeable if you’re looking for it. That’s where these two words are dangerous – it’s so easy to write it wrong and not even catch it before you press send.

Simply put, “then” is used to describe time, while “than” means you’re comparing two things together.

I can't tell how many times I would type a text message in a hurry and would accidentally leave off the second O. Obviously, this was a rushed mistake and spell check didn't catch it, but it just goes to show how easy it is to miss this error.

"To" describes a destination, recipient, or action and is typically used before a noun or verb. "Too" is a synonym for "also" or "as well."

I will plead guilty to making mistakes on this one in the past, so don’t feel bad at all (we all have our vices and grammar discrepancies). In fact, I would go out of my way to avoid using these so I wouldn’t fall victim to a lingering grammar nazi in the shadows.

“Affect” is the verb signifying a change is happening, while “effect” acts as a noun as to what the change itself is.

This wouldn’t be a properly sanctioned grammar mistake list if the infamous “they’re, there, and their” debacle wasn’t included.

Let's break it down and spot the differences: “There” describes a place, “their” means it’s owned by a collective group, and “they’re” is a contraction of “they are.” Although this seems easy, it makes writing look immediately subpar if these are used incorrectly. And, a quick proofread might not catch a misusage since they all look fairly similar. Be warned!

I would like to reference a famous blog called Hyperbole and a Half here, as the author makes a phenomenal post explaining the mythos of the “alot” and its misplaced notions in English (read it here).

Yes, dear readers, “alot” isn’t a word – so just remember to use “a lot” when talking about large quantities. No example required here, I don't think. You got this.

And, hopefully, Microsoft Word will catch this error for you so you don't have to think twice. Nevertheless, always proofread your work.

I see this way too often on Facebook where people say they’re going to “loose their mind.” Shouldn’t they know by now they wrote that all wrong?

Loose and lose don’t actually sound the same, unlike other commonly mistaken homophones (there, they’re, and their, for example). Loose sounds like moose, with the double O’s causing the S to sound like ‘ssss,’ as in snake. Lose, on the other hand, only has one O, so the S sounds like a Z.

That might have confused you, I know. I had to clear up the pronounced differences, though (the journalism major in me is coming out).

To put it simply, the term “loose” refers to something that is slack or unfastened, and “lose” means to not win or to misplace.

Luckily, there are a lot of sites out there that can help you easily capitalize the right words every time. Capitalize My Title gives you multiple options based on different style books like AP Style and Chicago Manual of Style.

Depending on what style book your company uses, you will have different rules to follow. In general, however, remember a few of these best practices:

Last, but certainly not least, is the ever-dreaded passive voice. Passive voice is bland and isn't as clear. Some people might not even know when they are writing in passive voice and not active voice.

Passive voice is used when the subject of a sentence is acted on by the verb. An example of this is: "The shot was made by the soccer player."

Active voice makes your writing stronger and more clear. It puts the subject in front of the verb, adding action to the sentence. "The soccer player made the shot" sounds much better than the former.

While this technically isn't a grammatical error, per say, it does affect your writing. Active voice gives more vibrance to your copy and engages your readers more. Though subtle, proofread your copy to spot sentences written in passive voice, and rewrite them in active voice.

I’m well aware English rules are created to be broken, but make sure you’re aware of what rules you’re breaking before you do so and the reasoning behind it. With these common mistakes in the back of your mind, you'll be sure to never make them again – right?

On that note – happy blogging, everyone!

Editor’s Note: This post was originally published in April 2015. It was updated in December 2018 for accuracy and comprehensiveness. 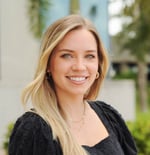 Baylor is an inbound specialist for Bluleadz. As a native Floridian, she enjoys soaking up the Florida sun, buying clothes she can’t afford, and dreaming about one day owning a dachshund.