Writers in Movies: Which Type Are You?

Movies about writers often portray us in an unflattering light. We’re depicted as crazy, dangerous, and drunk. When they do try to paint a better picture of us, we usually wind up as obnoxiously quirky or overly sentimental.

But, I’m not here to define us—we are all unique despite the boxes we’re often confined to on the big screen. Instead, let’s take a look at, and have a laugh at, the most common writer stereotypes.

There’s not a more frightening writer than Jack Nicholson’s character Jack Torrance in The Shining. Whether the Overlook Hotel is seriously haunted or he’s just certifiably nuts, all work and no play Jack meets with an imaginary bartender, makes out with a corpse, fantasizes about chopping up his family (okay, Olive Oyl is a bit annoying and bad with a baseball bat)... but then he kills freaking Scatman Crothers!

He also really sucks at mazes.

So why are we often depicted as nuts? Maybe it’s because we can be “grammar nazis,” and just one little misplaced comma can send us into a tizzy.

Wait a minute. There’s a common thread here. Damn you, Stephen King! So I’ll throw in a non-King movie. How about Sinister, starring “These Super 8's of death once filmed in my home are super awesome" crime novelist Ethan Hawke.

Okay, okay. I know many a quirky writer. Like creatives in other fields, writers often possess a different mindset. It’s why many don’t fit into an overly corporate setting that demands structure; our best work happens… when it happens.

But back to movies, I have the perfect one that probably few have seen, and it takes the quirky cake. I’m talking about Dudley Moore in the 1990 box office bomb Crazy People.

While Crazy People is a pretty awful movie, it does feature some hilarious, and all-too-honest, ad slogans written by its lead character, a copywriter played by Moore. Most are too off-color to print here (our blog editor Rob would surely remove them), but the premise is that because the slogans are so wacko, Moore’s co-workers think he’s lost his mind and have him committed to a psychiatric hospital.

Of course, it turns out he’s not crazy but just totally quirky, and Daryl Hannah loves him, so it’s all good.

This one comes up quite a bit, and I’m not sure why. Perhaps it’s because many writers lean toward the introverted side, leaving others curious about just what goes on in that head of theirs.

Though certainly not an introvert, I'm still giving the dangerous writer award to Sharon Stone in Basic Instinct.

Forget that infamous scene that everybody knows; she’s got some killer lines. As a crime novelist being interrogated by police for a murder that mirrors one she wrote about, she leans forward, exhales smoke from a cigarette, and cooly says, “I’d have to be pretty stupid to write about killing somebody, and then kill somebody exactly the way I described it in my book. I’d be announcing myself as the killer. I’m not stupid.” Mic drop.

Hard to say. But many of our most celebrated authors were notorious for their love affair with the bottle. F. Scott Fitzgerald, Ernest Hemingway, Dorothy Parker, Norman Mailer, J.D. Salinger, Edgar Allan Poe... But when it comes to movies, I’ve got to give it to Ray Milland as Don Birnam in The Lost Weekend.

This 1945 Oscar-winner is often credited as the first film to deal with alcoholism thoughtfully, whereas previous films simply used the drunk as comic relief. Of course, to portray alcoholism in a serious light, they chose a writer.

And Birnam is all in; not only does he have bottles hidden in light fixtures, he’s got them hanging by strings outside the window of his New York highrise so his concerned brother and sort-of girlfriend won’t find them. At one point, desperate for a fix, he even heads out to cash in his beloved typewriter at a pawn shop only to discover that they’re all closed due to Yom Kippur (apparently only Jewish people ran pawn shops in 1945).

We don’t know if Birnam is going to sober up by the end of the movie or not, but we leave him at his typewriter. The story title we see him type before the credits roll?  *73-year old spoiler alert* The Bottle.

Movies—even those set in modern times—often have their writer protagonist wield a typewriter. Sure, those taps sound better than the clacks of a common keyboard, and errors become easier to correct (sorry, Wite-Out). But is it really romantic?

While it had absolutely no business beating out Saving Private Ryan for best picture, 1998’s Shakespeare in Love puts a face on arguably the most famous and influential writer in history and turns him into a true romantic as we know the word today.

Forget those 19th century soon-to-be giants like Keats, Byron, and Shelley (often referred to as the Romantics; no, not these guys, though that is a great song).

Instead, romance means that Shakespeare is suffering from writer’s block. He finds inspiration through a fictitious muse played by Gwyneth Paltrow. His typing skills and mastery of words leave her breathless, and voila! He's penned Romeo and Juliet (Gwyneth, on the other hand, went on to create goop).

The words of a writer can inspire action and bring about change. Do you think politicians wrote some of their greatest speeches on their own? Uh-uh.

Anyhow, in an effort to keep things bipartisan, I’m skipping over inspirational and dipping back into the Stephen King well with my top sentimental pick based on his work, Stand By Me.

Sure, it involves the search for a dead body, but other than that ick factor, the movie is about growing up and the loss of innocence. I’d be remiss to try to write something more poignant than the final words of the film typed by Richard Dreyfuss, who portrays the adult version of the movie’s young storyteller, especially after learning of the tragedies that eventually befell some of the characters.

“I never had any friends later on like the ones I had when I was twelve. Jesus, does anyone?” If you’ve seen that movie and don’t get a little misty eyed there, what’s wrong with you?!

My favorite movie about a writer is Wonder Boys. It’s a little-seen movie from 2000 with an all-star cast, including Michael Douglas, Tobey Maguire, Frances McDormand, Robert Downey Jr., and Katie Holmes.

It also boasts an awesome soundtrack with original music from Bob Dylan (if nothing else, take a listen to “Things Have Changed,” it’s perfection). Douglas plays a one-hit writing wonder who’s been unable to come up with a worthy follow-up to his first novel despite years at, you guessed it, his typewriter.

While his editor (Downey, a pre-Iron Man pansexual) hounds him for his next novel, Douglas smokes a lot of pot and takes up teaching college courses for aspiring writers (this is where oddball Maguire and hot-for-teacher Holmes show up). I won’t spoil any more surprises, and I highly recommend it. It’s not your typical movie. Dare say, it’s quirky?

The movies are a reflection of what others see and believe. Of course, movies start with a script, which is written by a writer! So there’s probably a bit of truth to all of these traits in one way or another. But what makes writing so exciting is that every writer brings a different perspective and a different life experience to whatever they put down on paper.

Did I miss a great movie featuring a writer? Or even a crummy one? Did I leave out a common stereotype you’ve spotted over and over again? Let me know in the comments below! 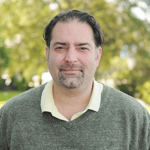 With 20+ years of advertising experience, I've written for many brands across all forms of media. Today, I put that experience to work for clients as an inbound marketer. A WMU graduate, I moved to Florida for year-round boating. When not on the water, I enjoy traveling (25 countries and counting).