How to Optimize Your Content for Featured Snippets & Win More Traffic

The last few years have brought more changes to Google’s search results pages than any other point in its development. In the past, the search engine was never shy about making small, but noticeable tweaks.

Now, however, we are on a completely different level.

Google is experimenting with the look and structure of results in a much more creative way than before. Featured snippets are Exhibit A for this change, and they have created their fair share of confusion.

As with so much that Google does, however, they also offer a great opportunity.

What Are Featured Snippets?

Featured snippets began to appear a few years ago as Google would pull a topic summary and illustration directly from Wikipedia for certain topics.

This was a perfect match for Google, since materials on Wikipedia are open source – there’s no need to pay to license them or even credit contributors in most cases. Plus, most people have come to see Wikipedia as a useful resource.

Gradually, these featured snippets started to appear for a wider range of queries and expand into different sources.

For example, if you search for a particular celebrity, you may get a rich snippet including biographical information directly from his or her website rather than Wikipedia.

Snippets were originally confined to biographical and encyclopedia-style topics.

Now, however, they are showing up in an increasingly broad range of results. Plus, they can come from virtually any website that is relevant and authoritative for the query.

That makes them a tempting goal for those who want to maximize the potency of their SEO.

Why Are Featured Snippets Important?

Because featured snippets are highly visible and often include illustrations, they have a very attractive clickthrough rate.

This has led them to be referred to as “search position zero,” since they can siphon a major amount of traffic away from the #1 search result spot.

In fact, clickthrough rates for the first organic result falls below 20 percent when a featured snippet is shown!

This is bad news for website owners who’ve fought tooth and nail to achieve position #1 for a certain keyword phrase, but good news for those who find themselves kicking around the first page of results and want to a new strategy to enhance their organic traffic.

There are only four major types of featured snippets you'll see, and hopefully appear in, on Google.

Also known as text snippets, these appear in paragraph format, highlighting a piece of the featured webpage's copy that answers the search question. Some come with pictures.

Typically featured for music or "how-to" searches, video snippets are suggested when Google believes that it will assist the user best.

Most results are pulled from YouTube, but you'll find other domains in its place occasionally. 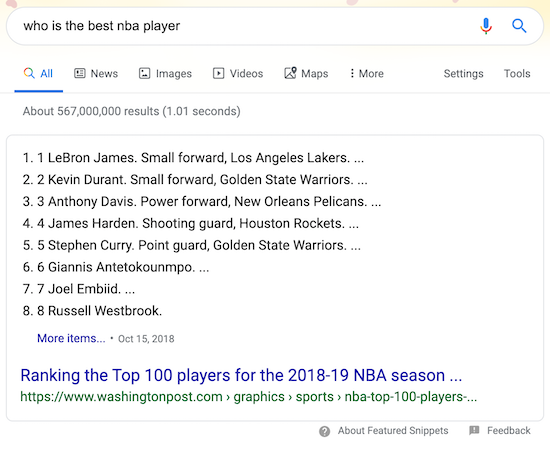 Some questions can be answered in list format. Whether it be a ranking, recipe, or just a genuine list, this snippet addresses a variety of intent.

In fact, Google sometimes will take data from the featured webpage and put it in list format even if that's not how it was originally formatted. 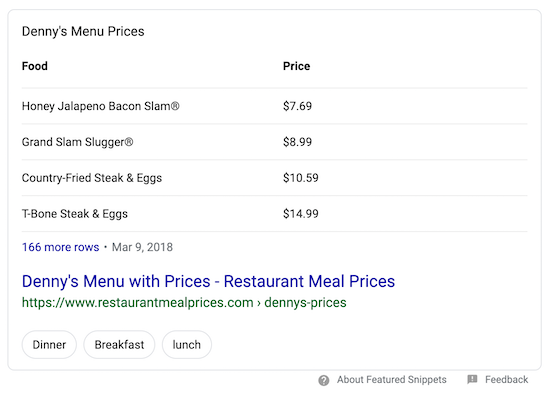 The same goes for table featured snippets. Google will pull the relevant data and build it out for easy reading in an effort to truly provide value to the user.

How to Optimize Your Content to Get a Featured Snippet

Many things about this fresh feature remain mysterious, but one thing is clear: You don’t have to be a consistent #1 player for a particular query to be highlighted in a featured snippet.

For now, it seems that any site that regularly appears on the first page for a given query may get the coveted snippet. A snippet won’t always be shown for a particular query, but it has potential to make a significant difference when it does.

The key is to optimize your blog posts in certain ways to achieve snippet status.

Let’s look at three of the fastest ways to become snippet-worthy:

Short paragraphs and descriptive headers are the orders of the day when it comes to snippets. The most snippet-y blog posts are generally structured to answer a question, look at different approaches to a problem, or break down a process into discrete steps.

With this in mind, they’re most effective when users can scan quickly and find exactly what they are looking for.

Each paragraph should be concise, punchy, and add a new idea or action item that users may be able to work on as they read.

Of course, Google’s spiders need to be able to make sense of the post, too! With this in mind, make sure you are using formal header tags (h1, h2, h3, etc.) for each header.

By analyzing featured snippets, it’s easy to notice a pattern. Google seems to use headers to guide its search for an answer and determine where to start highlighting text.

“Listicles” are among the most popular written content on the web, and for good reason.

A list is simple and straightforward for users to parse, letting them find exactly what they need if they are in the middle of a multi-part process.

Plus, it’s simpler to navigate and make sense of when you are working on a mobile device, as many of your prospects will be.

As it turns out, Google likes to see a good list, too.

List items provide you with natural divisions in your text and pair well with descriptive headers, as mentioned above.

A featured snippet will often focus on a single list item – you can make each item more compelling for users ensuring a visual is associated with each step.

Our research shows that when your blog post is heavily question-focused, you raise your odds of getting the prized place provided by a featured snippet.

Luckily, there’s a sensible way to do this that can easily become a simple and effective template for your written content.

Simply start out a post with a strong introduction that sets forth the question, then use list items with headers and images to walk through each aspect.

The Future of Featured Snippets

This is one case where it’s easy to see how Google’s goals and user preferences are aligned.

By following best practices that make an article more enjoyable and readable, you will be on your way to riding the wave of organic traffic that a featured snippet can offer you.

From all we can tell, it certainly seems like featured snippets are still a work in progress. It’s no surprise that Google may continue to refine them, like making them appear more frequently for some queries and less for others.

Still, it’s clear that they are a big hit among users.

They’re also exciting for smaller and mid-sized players who have an “up and coming” position on desirable keywords.

Although we all know companies and bloggers are always duking it out for the best search engine positioning, that often seems abstract.

Snippets bring the concept right to your door, showing you how certain actions, done consistently, can make a big difference.

There is one word of caution, however.

As of right now, featured snippets aren’t consistent enough to make a huge difference in your organic traffic for targeted keywords.

You can (and should) go back and update blog posts that center around competitive keywords to use snippet best practices. But don’t expect them to drive vast amounts of traffic overnight.

Gains in organic traffic will still be iterative.

Instead of laser-focusing on just a few blog posts that can be optimized for snippets, make snippets part of your ongoing SEO strategy.

Not only will you have the opportunity to capture “position zero” more often, but your clear, well-structured posts may inspire more social engagement.