10 Clickbait Examples That Will Make You Cringe

Peak clickbait has probably passed us by, but many publishers – especially those purporting to be news websites – are still using it to major effect.

And even if you’re in a conservative B2B-focused industry, you can still learn the lessons it has to offer for crafting your own marketing copy.

Unleashed by sites like Upworthy, clickbait has come to dominate many areas of the web.

Of course, all content is meant to be read and most aspire to be shared, but clickbait is different. It uses emotional hooks to create nearly irresistible psychological frisson for the unsuspecting user.

Much of this is accomplished through enticing headlines.

How Does Clickbait Work?

Clickbait gets shared further than other content. It inspires engagement and, often, commentary.

Yes, people did get wise to the content paradigm Upworthy helped to pioneer. And yes, did they complain about it a lot.

Clickbait has a bad reputation in many circles because many writers don’t focus on actually delivering on the promises made by those headlines. When clickbait consistently overpromises and under-delivers, even the most trusting web user eventually tunes it out.

That said, the flip side of the coin can be profound. Publishers can use Upworthy’s techniques to great effect, as long as that’s not all they do.

After all – despite all that some people have castigated clickbaiting as manipulative or repetitive – many established journalistic brands are deploying the exact same tactics throughout their sites.

Why Does Clickbait Work?

The “Upworthy headline,” which conceals the topic of a story until you click on it, propelled its namesake to become one of the world’s top websites.

In fact, it was reaching nearly 90 million people each and every month until its decline started in November 2013.

There’s one big secret to how clickbait works on the brain: The curiosity gap.

The curiosity gap refers to the space between what we know and what we want to know.

There are three big reasons why this is powerful:

People are wired to dislike ambiguity. This has been true since back in the very beginning, when a rustling in the bushes could herald the arrival of a dangerous predator. When ambiguous stimuli is at risk of being ignored, the brain’s limbic system gets involved.

The limbic system, also called the “lizard brain,” is the partnership of neural networks and systems in charge of basic emotions like fear, anger, and pleasure. It also regulates fundamental survival drives.

Most importantly, it monitors the environment for changes and responds to threats.

Novel stimuli can cause the limbic system to kick into action in an instant. It happens far faster than a conscious thought, and it doesn’t always have a noticeable emotional component.

Nonetheless, people tend to act on limbic responses quickly and without thinking. Unless you are concentrating on something else, that bright, shiny headline is likely to break into your attention.

It’s worth noting that different cultures can exhibit higher or lower ambiguity tolerance when communicating. Still, there’s an inescapable neurological bias toward achieving whatever level of clarity “proves” there is no threat.

All other things being equal, you’re more likely to remember an unfinished task.

This effect was first remarked on in 1927 during a study headed by Lithuanian psychologist Bluma Zeigarnik. She was researching the effect of interruptions on memory processing and realized that when a task is interrupted, it remains clearer in memory.

This makes a lot of practical sense when you think of today’s to-do list culture!

It’s easy to think of clickbaiting as an interruption rather than a task, but that’s not necessarily how the brain sees it. The mental effect of these headlines is to leave something potentially important unknown.

In other words, you can walk away from even the most compelling headline – but there’s a cognitive cost.

Even once you turn your attention to something else, you might find a nagging feeling that you really want to know. This feeds into another, more familiar phenomenon: One that’s just as much social as it is neurological.

Fear of Missing Out (FOMO)

Social media in particular works by creating a self-reinforcing feedback loop where little hits of dopamine, the pleasure hormone, arise from quick interactions like checking your notifications.

Like the proverbial lab rat, even the mightiest of us will often find ourselves sliding into a pattern of repeatedly checking on “likes,” messages, and our feed to continue gobbling occasional rewards.

The underlying thought process? That something good might be happening somewhere, and it’s all too easy to miss it.

With its ambiguity and implied promises of a huge emotional payout, clickbait goes above and beyond in evoking FOMO: If you don’t click, you are literally missing out.

Psychologists have become more interested in FOMO as a phenomenon, especially as it relates to younger people whose brain structures have not finished maturing. Although FOMO has always existed, digital technology broadens the horizon of opportunities to experience it.

Clickbait summons the power of FOMO in miniature by leveraging affective forecasting, our sense of how we will feel in the future.

The thought of missing out is most likely to lead to a forecast of regret. People will then take action to make sure they avoid that unpleasant future.

Clickbait in Marketing: To Try or Not to Try

Understanding how clickbait works doesn’t necessarily justify using it though.

So what’s the verdict on practicing it?

Plainly speaking, clickbait works. It’s definitely worth a try… as long as you’re doing it right.

It’s far too easy to abuse clickbait headlines, which ultimately leads to creating distrust between you and your audience. It’s about finding that happy medium of a clever headline and high quality content to back it.

Depending on your content marketing strategy, clickbait may not fit your business or your brand. We’ll go over the positives and negatives that come with the practice:

If the ultimate goal is to get clicks, then this is your best option. With the pull clickbait has on the human psyche, it’s almost too easy to draw in traffic with a witty, creative title.

Clickbait has proven itself as a useful tool time and time again, and it likely isn’t going anywhere. It gets viewers to your blog or site and provides that window of opportunity to convert.

Clickbait Is Part of the Game.

Witty, half-true headlines have become such an integrated part of today’s media consumption that it’s pretty much become the way of the game. If you’re not using at least a modest version of clickbait, you’re part of a very small group.

Competition is high and everyone is doing all that they can to attract visitors, sometimes by any means necessary.

The chances that someone in your industry is leveraging clickbait is pretty high. But they may be doing it all wrong, tricking their readers into clicking on their content.

If you enter the ring with some better practices, you’ll be bringing in leads with enticing titles that actually follow through on their proposed value.

Clickbait Helps You Stand Out.

Even if clickbait makes you feel a little uneasy, there’s no denying that it works. And proven strategies shouldn’t be ignored.

If you’re creating high-quality content and offering products or services that will truly benefit your audience, then it should be your top priority to get your content out into the world.

Clickbait is what’s going to get your content noticed and generate leads for you once they see that your stuff’s good. It’ll bring your ideal customers to your business instead of your competition.

People have learned to recognize clickbait titles for what they are, so articles with them are often met by a great deal of skepticism.

If your titles are too obvious or overly exaggerated, then no one’s going to bother clicking on it. Audiences have been overexposed to sensationalist titles and are fed up with being duped.

Overcoming that obstacle can be a challenge for those who haven’t refined their title ideation skills yet.

When you promise that content is going to be “game-changing” or “mind-blowing,” you run the risk of setting the bar too high for yourself.

Visitors are going to click on your post with the expectation of being wowed. And if you don’t, there’s hell to pay in the form of decreased traffic.

You can’t overpromise in a variety of ways:

There’s a difference between drawing readers in and setting up for a pitch you can’t actually swing at.

Clickbait Can Affect Your SEO Ranking.

Just because you’re getting more clicks from a catchy title, that doesn’t mean you’re going to get better results. Google and other search engines key into the bounce rates of your pages.

If people aren’t getting the content they were expecting, they’ll exit off your page pretty fast, alerting Google that something isn’t quite right.

It’ll be assumed that your webpage doesn’t match intent or the searched keyword, and you’ll drop in SERP ranking quickly.

Measuring the pros and cons of clickbait is something you have to do against your business model and content strategy.

While you decide if clickbait fits your brand or not, it doesn’t hurt to see what not to do. Here are some pretty tragic examples of the power of clickbait wielded in the wrong hands. 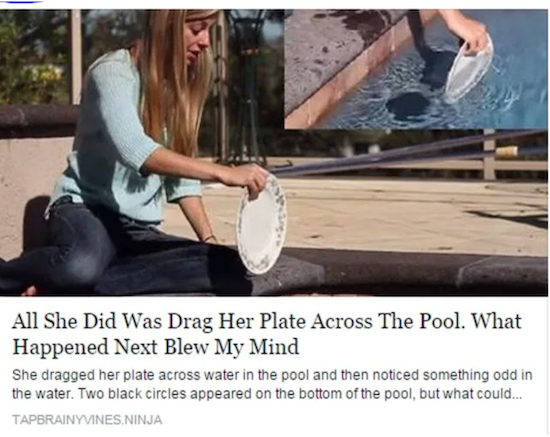 Honestly, what is the attraction here? Surprise, surprise, it turns out that she just created a little mini-whirlpool. 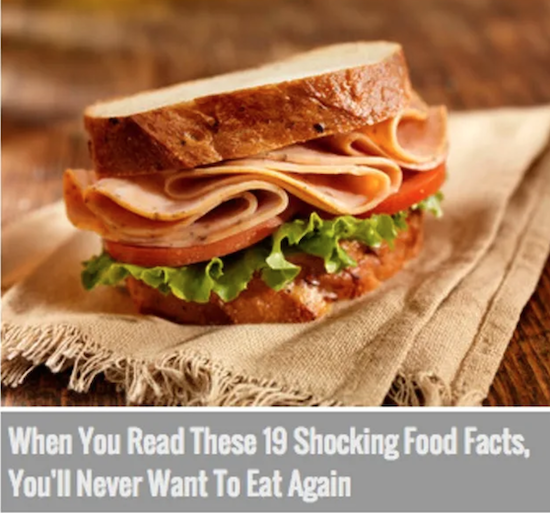 The article just lists the calorie count of different foods and meals. 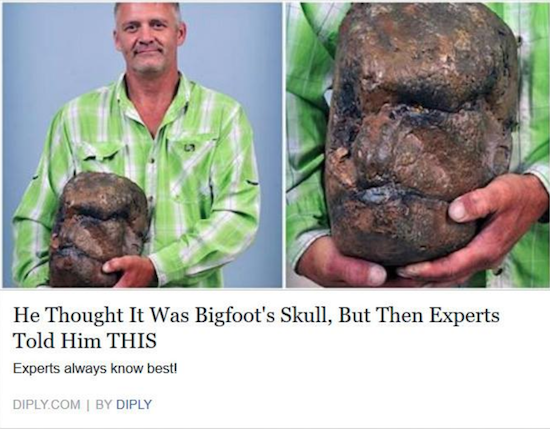 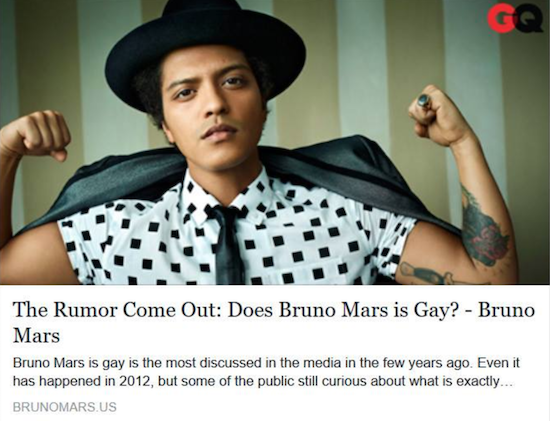 But he's not. The rumor is just that, a rumor. Speculation doesn't equal quality content, folks. 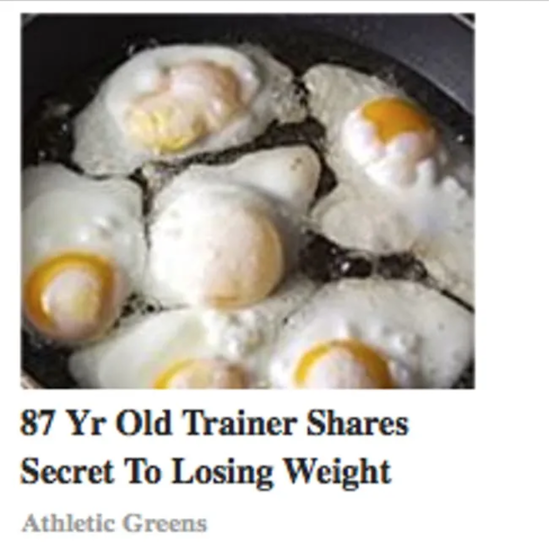 They pitched the groundbreaking idea of eating a healthy, balanced diet.

It wouldn't be a fair argument if we didn't show clickbait at its finest. When done correctly, keeping user intent, value, and worth in mind, witty headlines can actually resonate with your audience. 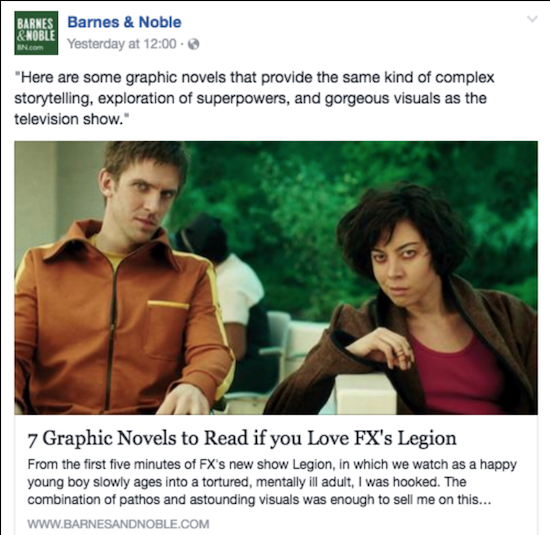 This ad speaks directly to a particular fanbase who might be looking for new content to consume. Only those who meet those conditions will click, meaning only qualified leads will land on the page. 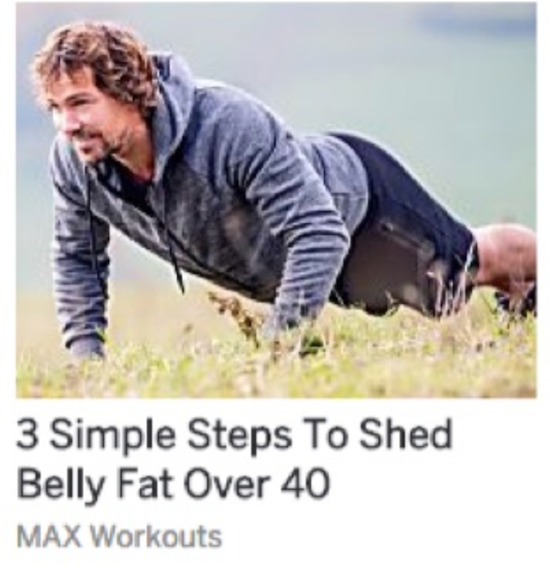 Straightforward, to the point, no sensationalization. This is a great ad speaking to a targeted audience. 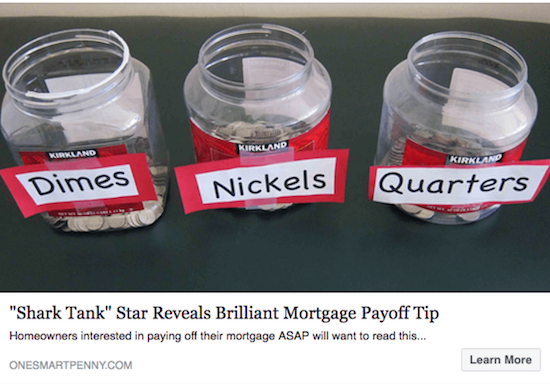 The idea of piggybacking off a popular show like Shark Tank is great because you'll pull in fans along with homeowners. 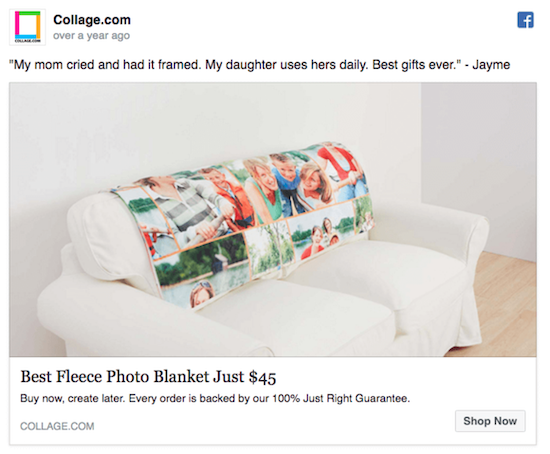 This ad includes everything you need for a successful pitch: the product, the price, money back guarantee, and a customer testimonial. 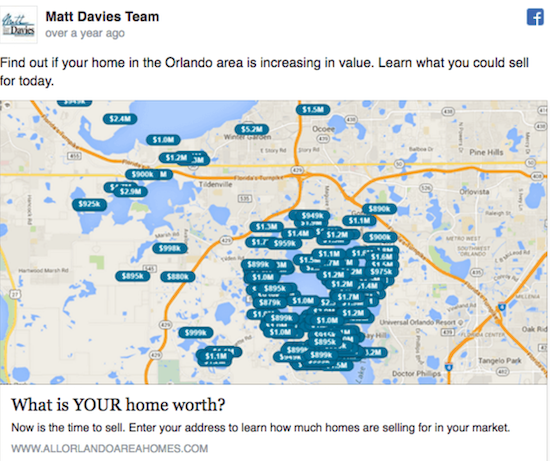 With a personalized map image, this kind of clickbait will speak directly to residents in the Orlando area. Targeted, local marketing ads are easy to design nowadays, so this is a great combination of the two.

When all is said and done, clickbait remains just as powerful as ever if used correctly.

It taps into foundational psychological drivers that none of us are immune to. Even those who consciously resist it pay a price in attention resources: It’s often much easier to just click.